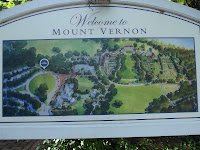 The last in this series...I promise. A first time visit to DC must contain a look at the big guys home just a mere 8 miles from our hotel in Alexandria and 17 miles from downtown DC. A beautiful ride awaits you along the George Washington Memorial Parkway (Va State Highway 400) which gently winds its way along the Potomac’s western shore. In early May, the limbs of the old-growth trees were heavy with dark green leaves, which threatened to envelope the road around each curve. We sped by (posted max speed is 45 MPH!) several B&Bs and small restaurants along the way. We may have to check them out on our next trip. 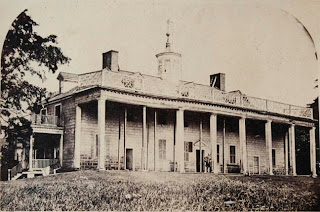 Some of you may know that Mt Vernon is privately owned and not operated by the US Park Service. Mount Vernon is owned and maintained in a trust by the Mount Vernon Ladies' Association of the Union, a private, non-profit organization founded in 1853 by Ann Pamela Cunningham. The Association is the oldest national historic preservation organization in the country. They began restoration of the 500 acres along the Potomac in 1860. You see, after George and Martha had passed away, none of the kids stuck around to run the place. By the mid-1800’s the place had fallen into serious disrepair and was in fear of collapsing.


The property has a long pre-Revolution history back to the earliest settling of Virginia. George’s great-grandfather, John, bought a stake in the property in 1674. John died in 1677 and his stake transferred to his son Lawrence (Washington’s grandfather). Upon Lawrence Washington's death, he left the property to his daughter, Mildred.


Augustine then recruited Washington’s older half-brother Lawrence to run the place while Augustine moved back to Fredericksburg, Virginia. Lawrence continued expanding the plantation by buying up land around them. In 1740, Lawrence received a commission in the Regular British Army, and went off to war in the Caribbean with a newly formed American Regiment.


While he was away at war (the War of Jenkins' Ear, 1739–1743), Lawrence wrote to his father from Jamaica in May 1741, that, should he survive the war, he intended to make his home in the town of Fredericksburg, Virginia. When Lawrence made it clear he was moving back to Fredericksburg, Augustine began construction of a modest farmhouse on the bluff where Mt Vernon is today. When Lawrence learned this, he wrote his father instructing him to call the new home "Mount Vernon" in honor of Captain Lawrence Washington's commanding officer, Vice Admiral Edward Vernon.


Lawrence returned from the war, buried Augustine in 1743 and Lawrence did the first expansion of the farmhouse on the bluff. Lawrence died in 1752 and a portion of the estate fell to his younger half-brother, George. Two major expansions of the main house occur under Washington doubling the size each time to the neoclassical Georgian architectural style we see today.


Although tobacco was the main cash crop in the south, by 1766, Washington had completely ended tobacco growing at Mount Vernon, instead raising wheat, corn, and other grains. Besides hemp and flax, he experimented with 60 other crops. Washington built a gristmill, which produced cornmeal and flour for export and ground neighbors' grain as well. He similarly sold the services of the estate's looms and blacksmith, and built a small fishing fleet that let Mount Vernon export fish. Back in 1797, Washington was one of the original distillers of whiskey in America. After the war and during his Presidency, he concentrated on the grounds improving the gardens and expanding the farming operation. Some of those gardens have been beautifully restored.

Because other crops were much less labor-intensive, than tobacco, Washington refused to break up slave families and so the estate always had too many slaves. To reduce his dependence on slave labor he began hiring skilled indentured servants (and the difference is?) from Europe to train them for service on and off the estate.

A little deceiving from the outside, the iconic home sits at the center of several support buildings containing the kitchen, slave quarters, smokehouse, coach house and stables. It is a two floor (three if you count the Cupola at the top) wood home consisting of 21 rooms (if you count the basement spaces) and approximately 12,000 sq. feet.

Washington led by example, striving to make Mount Vernon a model of new, science-based agriculture, in order to benefit other farmers. He experimented with crops and fertilizers and continually sought the best innovations. It’s important to remember the guy was a businessman; he took advantage of the opportunities provided by his wealth and position, eventually running flourishing fisheries, a gristmill, and the largest distillery in the country. His distillery was also restored and produces up to 5,000 gallons of whiskey annually, for sale only at the Mount Vernon gift shop. 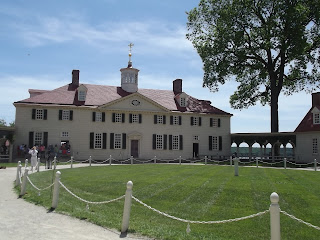 Arriving at Mount Vernon is a bit of a surprise. As “Disneyland” as an historic landmark can be. Thousands of people make the trek and all must follow one of two distinct paths throughout the estate. You can just walk the estate on your own or with one of those cool “self guided tour” audio players (you’re even encouraged to bring your dog on a leash). Then there is the house tour. The house tour consists of staging at your appointed time on the dirt driveway for a “foot shuffle” tour with a guide. These groups wend their way (thus the sounds of “shuffling of feet”)  through the first and second floors of the main house with brief glimpses of the bedrooms and parlors where chiefs of state and the famous who chased after them visited, dined and slept. The view from the back porch from the Windsor chairs overlooking the Potomac is stunning. 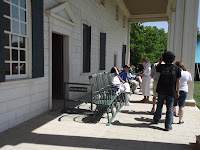 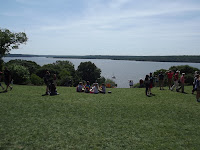 You can stand at the foot of the bed where Washington died in 1799. Washington had ridden his rounds around the estate on a cold and wet December 12th ,1799 and failed to sufficiently dry out and warm himself. He complained of difficulty breathing and all evidence points to a condition called  Eppiglottitis. Doctors were called but were unable to treat him. He died December 14th at the age of 67 most likely by asphyxiation. 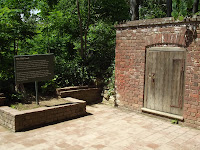 A burial chamber was constructed on the estate and Washington was buried there. Although Congress had authorized a marble monument in the United States Capitol for his body, in December 1800, the House passed an appropriations bill for $200,000 to build the mausoleum, which was to be a pyramid that had a base 100 feet square. There was too much opposition and it was never built.


In 1831, for the centennial of his birth, a second tomb was constructed to receive his remains. Interestingly, that same year, an unsuccessful attempt was made to steal the body of Washington. His remains were moved on October 7, 1837 to the new tomb constructed at Mount Vernon. After the ceremony, the inner vault's door was closed and the key was thrown into the Potomac (you can’t make this stuff up). 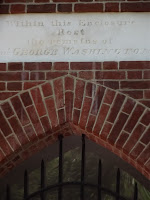 I liked Mount Vernon. I walked away with a couple of things. The first was the reverence for a great man and his legacy. The home and especially the museum really take you back to the times of Washington and some perspective on how a relatively small group of people created a new country and way of life for its citizens. The other was, hey...I saw where Washington actually slept.

There is a food court of fast foods but we chose the Mount Vernon Inn restaurant. They have an eclectic menu of traditional favorites from the period with a few modern items. The food was great. 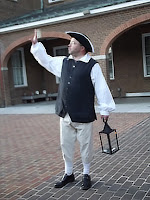 Having hit the bulk of our bucket list of places to visit in DC, we made our way back to our hotel for our last night in Alexandria. We signed up for a  Ghost Tour  of old Alexandria so we caught dinner at The Wharf on King Street. Great seafood and steak place.

From there we walked to the Alexandria Wharf, a place called The Torpedo Factory  . The area was the site of a Naval Armory, which made torpedoes for the military from 1918 until the late 60s. It then turned into a storage warehouse for the Smithsonian until purchased by the City of Alexandria. It was opened as a mixed-use development in 1983. 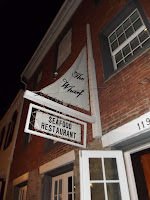 The Ghost Tour was somewhat lame but we did get to see a couple of significant historic spots. Gadsby’s Tavern  has its roots in early American history as a gathering place for Revolutionary and post-Revolutionary icons. From George Washington, John Adams, Thomas Jefferson, James Madison, and James Monroe even Thomas Jefferson was feted in 1801 with a banquet in the ballroom of the Tavern. President Andrew Jackson spent the first night of his presidency at the tavern; he sneaked out through a window of the White House and walked the six miles to Alexandria to avoid a particularly raucous inaugural party. The Marquis de La Fayette quaffed a few beers there as well (or was it white wine). 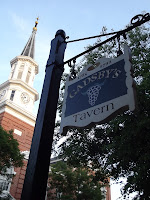 The other was the townhouse Washington owned and stayed at while in town for business. There is a neat little marker on the wall, which showed that Washington had paid his Fireman’s Tax. If you had a fire, this would alert the firemen you had paid your tax and would allow them to put out your fire. Tough town to live in. 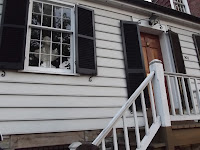 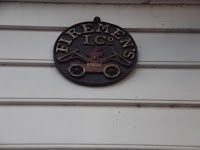 The following morning, having exhausted our stay, we packed our booty and made our way downstairs. When we loaded up the rental for the airport, our poor Indian (red dot) valet tried valiantly to power lift her suitcase into the trunk to no avail. I had to jump in and lift before Sanja blew out a disk. When we left, to check the weight of our (well….her) bags, I loaded them on our bathroom scale and noted her big bag was about 40 pounds. When we got to the rental return, on my first try to extricate her bag from the trunk, I too considered making a Chiropractor appointment on our return home.


Interestingly, when I hoisted her bag onto the scale at Reagan National, it tipped the scale at 61 pounds. Recalling the new American Airlines rules, I pulled out my wallet to pay the overage (50-pound max). The very nice ticket agent just looked at me with a knowing nod and accepted the bags. Well, American was in Chapter 11 so maybe they were cutting us some slack so we would come back some day.
Posted by Nick Saraceni at 2:15 PM