My wife and I have committed ourselves to get out and see Texas. When we were in California, with kids, school, work (and whatever excuses we could come up with), we rarely ventured out of our County. Well...we did get out on some vacations here and there by car and plane but when you're with kids, it's all about their fun and activities. You know, the guilt about being working parents and not wanting to traumatize your children so they become mass murderers or, God forbid, workaholics like you (which is what ultimately happened). So we never got any adult time until the kids were on their own and we began taking ship cruises to foreign lands. Texas gave us an opportunity to leave all that behind and discover this vast and diverse land we immigrated to.


As stated earlier, we have met some fun folks to hang with and this last weekend we were invited to hook up with Debbie and her husband Torrey and check out their "project home" purchase in Tom Bean, Texas (yes, that's the town's name) just east of a town named Van Alstyne, Texas in the southeast corner of Grayson County. Torrey is a pretty handy guy and he and Debbie buy second homes to rehabilitate and renovate. They found a two-acre piece of property with a one-story fixer-upper in need of sprucing up. They wanted a place relatively close to work and their home in Little Elm, Texas so they could work on the house on weekends and be "away from it all" in rural North Texas.

Tom Bean was founded in 1887 and named after Thomas Bean, a land surveyor from Bonham, Texas who donated the land to be used as a stop on the local railway (the recurring railroad theme). It later became a stop on the St. Louis Southwestern Railway. In the late 19th/early 20th century, Tom Bean was bustling with two saloons, a movie theater, a social club, a cotton gin and factories. However, growth soon ended, and eventually the railroad removed the tracks through the city. There's about 1000 folks living there now and some consider it an up and coming bedroom community of nearby Sherman, Texas, the County seat of Grayson County.

It should be mentioned that Torrey is a kind of BBQ aficionado, has a smoker BBQ and has even gone so far as to make his own rubs and BBQ sauce. He is hell bent on acquiring his own steer and maybe a pig to coddle so he can have his own supply of beef and pork to BBQ and smoke to his heart’s content. Torrey has never met a piece of brisket he didn't like. His proposed 4H project has thus far been stymied by Debbie's concern over having to eat something she may become emotionally attached to. You know, once you name it, you can't eat it.

So, in our travels to the new place, he wanted us to go to a new BBQ restaurant he had heard of in Van Alstyne, Texas, Buck Snort BBQ on E. Jefferson in downtown Van Alstyne. As I mentioned in my Profile, I'm all about finding good food to eat, so we went along for the ride.

Now I had been through Van Alstyne before on business for the Frisco Police Department a time or two. Van Alstyne is the home of Cops Stuff, an emergency vehicle outfitter on the east side of town where we get our new vehicles outfitted with lights and sirens, but I had never taken in the sights of downtown Van Alstyne.

The present town of Van Alstyne was formed by residents of a town named Mantua. When that community was bypassed by the Houston and Texas Central Railway railroad in 1872, they packed up and moved the town, lock, stock and barrel. The residents moved to be close to the railroad right-of-way and that new town was named after a railroad stockholder, Marie Van Alstyne. A post office was opened in 1873 and the town's population was 400 in 1890 when it incorporated. Around 1900 the town had 1,940 residents and a number of businesses, including several banks, a grain elevator, a roller mill, and a chemical company. It has about 2,500 people calling it home now.

Van Alstyne boasted one of the first Opera Houses in North Texas. In 1894, the Opera House opened its doors. The original owner of the building, Charlie Carter, ran a family grocery store on the ground floor. 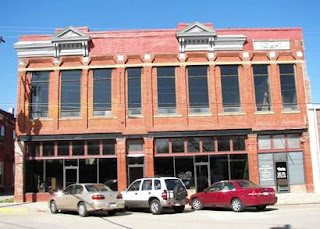 Van Alstyne was the last home of Collin McKinney, the namesake for our Collin County and the City of McKinney, Texas, the County seat of Collin County. Born on April 17, 1766 in Hunterdon County, New Jersey, McKinney was one of the first settlers in Mexican Texas in the Red River Colony in 1826. He was a land surveyor, merchant, politician, and lay preacher.

In 1836, McKinney was a central figure in early Texas history and was one of five delegates from the Red River Colony to the Convention of 1836, which called for Texas to declare its independence from Mexico. He was one of five appointed to draft the Texas Declaration of Independence, and at age 70 he was the oldest to sign it. He would later be a member of the committee that drafted the Constitution of the new Republic of Texas.

In 1840, he would move one last time, to a portion of Fannin County that would later be formed into Grayson and Collin Counties. He passed away at his home in September 9, 1861 and was buried in Van Alstyne. 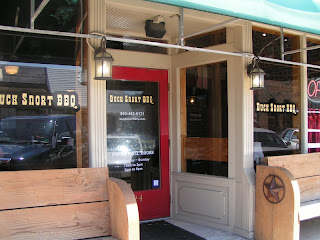 Ok, back to the food. The owner of Buck Snort BBQ, Jim Smith, has done an incredible job of salvaging a segment of a really old building (circa 1880's) and creating a great eating spot. I need to explain that Texas BBQ (and most all BBQ style food) is generally a messy affair of baskets or plates of brisket, pork, chicken, or sausage (or all the above) spread over or sans bread with copious amounts of baked beans, fried ochre and coleslaw. There are usually baked biscuits and buns to sop up the left over juices and BBQ sauce sloshing around the plate (and even on the patrons).

Now Jim did a smart thing. Traditionally, Texans stand in line and order their favorite artery clogging combination and wait for the concoction to be prepared. Depending on the popularity of the place, the wait can be long and arduous but all is forgiven upon delivery. Well Jim decided to do his both ways. You can have the traditional wait in line and order from the cash register or you can choose to do his buffet style dining (did I hear the words "all you can eat"? Yep).

Jim stocks the entire menu on a buffet steamer bar and even has the desserts on the back table for all to sample. On that day, it was bread pudding and apple pie. All the while, Jims running in and out of the kitchen bringing baking pans full of right out of the oven biscuits and rolls out to the hungry masses. One note, Jim is obviously a master baker as well as brisket maker. The rolls literally melted in your mouth and the biscuits that day were flavored in a combination of green onion and garlic, which were to die for. No need for butter to defile the flavor but there was plenty on hand if you needed it.

As to the BBQ, well the restaurant was one of the quietest BBQ places I have had the privilege to be in. Everybody seemed preoccupied with eating. The brisket was juicy and the beef fell off the rib bones. Debbie had the chicken and said it was one of the best she ever had.

After eating, we waddled out to settle all the food we had and decided to walk around downtown. We immediately saw in the Drug store next store to Buck's, a still used classic soda fountain circa 1950. It was Sunday and wasn't open but I was able to get a shot of it through the window declaring "City Drug" in old style gold leaf lettering. 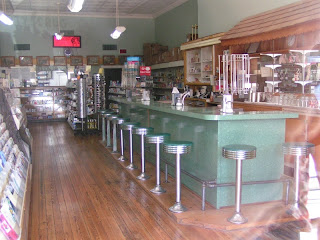 The rest of the town was pretty average, typical of the small rural railroad town of the late 1800’s. It was a place where farmers and ranchers would come at the end of the workweek to buy supplies, food and personal necessities like clothing and shoes. Families, ranch and farm hands would come to town to get their latest news, whoop it up, enjoy a shave and a bath, participate in a dance or come to church.

Bucolic Van Alstyne suffers today, like other towns of its size, as it did when the railroads stopped coming. The bigger towns and cities around it have attracted bigger businesses and development so it remains a bedroom community and home to small and mid-size ranches that no longer need to be served by a major railhead. But there’s still life in the old girl as boutique, antique and niche shops are moving in to the old storefronts and gaining some ground.

The town has a downtown development committee, which is trying to attract more business, and some new home development is taking place on the outskirts of what was old Van Alstyne. As the economy turns around, and more entrepreneurs like Jim Smith come to town, I see big things in the future for places like Van Alstyne.
Posted by Nick Saraceni at 9:32 AM