Living in a place like California can make one a little myopic as to what the rest of the world has to offer. California, of course, has a very rich and extensive history of wine making that harkens back to the bringing of European grapes by Cortés and the hordes of Mission Friars that came around 1520. The vines were brought initially to produce sacramental wine for Mass (yeah, I’m sure that’s all they used it for). Of course, the Spanish, realizing there was a market for mass consumption, a real moneymaker, expanded their wineries to all regions of California.

When we think of wine, many of us immediately think of the Napa and Sonoma region of northern California, but in America, we rarely hear of any other places that produce wine. Meanwhile, there is a vast thriving grape squeezing business going on right here in Texas.

A little history is needed here. Texas has always had many native grape varieties naturally growing within the State. What isn’t generally known is the impact Texas grapes have had on the more contemporary history of wine making. There was a thing called the Great French Wine Blight in the mid-19th century that destroyed many of the vineyards in France (and Europe in general) and laid waste to the wine industry. It was caused by an aphid, commonly known as grape phylloxera that originated in North America and was carried across the Atlantic in the late 1850s.

How the Phylloxera aphid was introduced to Europe remains hotly debated: American vines had been taken to Europe many times before, for reasons including experimentation and trials in grafting, without consideration of the possibility of the introduction of infection to native grapes.

It is argued by some that the introduction of such pests as phylloxera was only a problem after the invention of steamships, which allowed a faster journey across the ocean, and consequently allowed durable pests, such as the Phylloxera, to survive.

Fortunately, the remedy of grafting resistant American rootstock was well known and the Californian wine industry was able to quickly rebound and utilized the opportunity to expand the plantings of new grape varieties.

Although the French had known about the blight for some time, it took an American in 1870 named Charles Valentine Riley to figure out that by grafting a Phylloxera resistant American rootstock to the infected European rootstock, they could reconstitute the European vines and end the blight, thus saving the European wine industry.

Back to Texas and our own T. V. Munson of Denison, Texas. Munson moved to Denison, Texas, in April 1876 where two of his brothers had already relocated. Few persons have or will ever study, describe, classify, breed, select, propagate, market, record, and exhibit greater technical excellence about the grape than Mr. Munson. For 30 years, 1880 to 1910, he traveled 50,000 miles by horse, train, and foot in 40 states, making concise notes on over 1,000 native vines.

The greatest contribution of T. V. Munson was his cooperation with the French wine industry in developing Phylloxera resistant rootstocks. Once the solution was identified by Charles Valentine Riley and it was learned that American species were resistant, the great challenge of moving rootstock material to France was taken up by Munson. For four months in south central Texas, from Bell to Bexar (pronounced “Bar”) counties, Munson organized dozens of workers and landowners who collected 15 wagons of dormant stem cuttings for shipment to France. The vines were the breeding stock for the rootstocks, which saved the European wine industry. Yes, we baled them out of that one and those little skirmishes of WWI and WWII and they still don’t like us. Riley and Munson were feted as heros by most of Europe.

Hundreds of villages were saved and thousands of grape growers were able to grow grapes again. The rootstocks used throughout the world today originated from that Texas native grape material from Munson. For this effort, T. V. Munson was awarded the Legion of Honor, Chevalier du Merite Agricole, by the French Government. Who knew Texas held such an important place in wine making history?

Matter of fact, the most important agricultural/viticulture (that’s grape growing for us uneducated folks) schools in Texas are at Texas A&M University, Texas Tech, and closer to home, Munson’s work is preserved as a course of study at Grayson County College in Munson’s home of Denison, Texas just north of us here in Collin County. 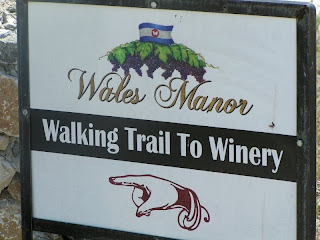 All of this was brought to our attention by making a last minute stop at a winery just on the outskirts of McKinney, Texas one afternoon. Our friends, Debbie and Torrey, had seen a small sign on the side of the road directing us to Wales Manor Winery . As we turned into the front gate, we were immediately greeted by rows of grape vines leading to a modest wooden structure in a stand of trees. We were greeted by the winery’s owner, John “Josey” Wales. John is a long time airline pilot and former Army helicopter pilot (my kind of guy). His call sign was “Josey”. He told us he always had a taste for fine wines and his aviation career gave him plenty of opportunities to visit wineries in many different countries. He got the bug and decided he wanted to make his own wine and put together Wales Manor. 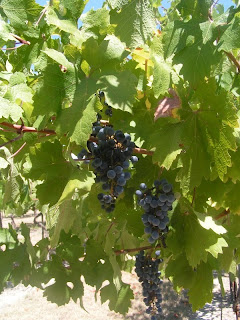 John told us the story of how all 12 original grape varieties originated in Persia back to about 6000 to 5000 BC. The earliest evidence of wine production was around 6500 B.C. by the Macedonians (now southern Greece). The grapes moved to Egypt when Marc Antony and his Roman buddies got a taste for the juice. They began shipping vines back to Europe and they spread them throughout the Roman Empire. That’s how they got established in places like Germany, France and Spain. When the Chinese made a run into eastern Europe and Greece, they too got a taste and brought grapes to Asia. The rest is, well alcoholic history.

John said some of the earliest recorded Texas wines were produced by Spanish missionaries in the 1650s near El Paso. He said grapes and wine making were big business right up to the Civil War (War of Northern Aggression for you southerners). Then there was Prohibition. Even today, a quarter of Texas' 254 counties still have dry laws on the books. That’s caused a huge interruption in the production of grapes and Texas wine and the industry is just now making a serious come back.

Wales Manor Winery is unique in that John doesn’t advertise or sell his product outside of his little operation. You can’t find his wine in restaurants, grocery stores or liquor stores. He sells everything from his little tasting room, website, and at open-air events he sponsors at the winery like weddings, private parties and outdoor concerts. As he poured sample after sample of his wines for us, he gave us an example of how he names his wines.

While pouring us a delicious little Cabernet Sauvignon Rose named “Passion”, he pointed to the image of a lipstick transfer set of women’s lips on the label. Back in 2005, John had been seeing a young lady who was visiting from California. During a romantic moment while walking through the vineyard, she kissed him and he promised to name that grape's harvest and subsequent wine in her honor. She then had to return to California and they conducted a long distance relationship.

Once the wine had been produced, he sent her a bottle and continued to profess his love for her. Her email response indicated she was thrilled to get the bottle, which she planned on sharing with her fiancé in California. When John called her for clarification, she confessed she had been seeing the boyfriend at the time she visited Texas and had balanced the two relationships until deciding to marry California man. After thanking her for her honesty (yeah, I’m sure that’s the way it went), he moved on. Unfortunately, the wine had already been bottled and labeled. John said, had he known this before printing the labels, he might have changed the name to “Two-Timing Bitch”.

John said he completely sells out his yearly stock each year only by word-of-mouth. He said it gives him and his four employees the freedom to try out new varieties and formulas without the market pressures or mass production schedules (or headaches) of the big guys. He name-dropped some big name entertainers and personalities he’s met through his business and loves to come to work every day. He says he wouldn’t continue to do it unless he was having fun. When the fun stops, he’ll quit. We hope that day never comes. 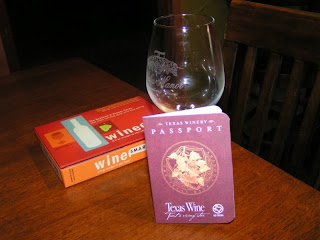 According to the Texas Department of Agriculture and the Texas Wine and Growers Association, there are about 210 commercial wineries in the 5 American Viticultural Areas of Texas (places suited for grape growing). We’re in the North-Central region. John gave us our Texas Winery Passports we intend to get stamped at future Wineries as we continue our exploits in Texas.
Posted by Nick Saraceni at 8:44 AM