Texas, for most of us Yankees (yes, some still refer to non-residents that way), is the place we see depicted in movies and television (well, except for the long running show Dallas). Wide expanses of rolling prairies interspersed with small towns with really cool names like Cactus, Gun Barrel City, Deadwood, Dime Box, Fate, Lone Star, and Spur. The motto of the City of Fort Worth is " Where the west begins". When you speak the names and close your eyes, you can smell the leather tack, the dry boards of a covered sidewalk and feel the rumble of the stagecoach pulling up to the Wells Fargo office.

So I was intrigued when a friend told me of a Texas ghost town close to us named Climax, Texas . It was a mere 27 miles east of our home and had been one of the earliest settlements in the newly formed State of Texas. It was first settled by Williams (yes, with an "s") Warden, a farmer who moved to Texas from Missouri in 1844 in what is now a part of our Collin County north of the town of Princeton, Texas. In 1850, Warden received a Peters' colony land grant certificate for 640 acres near the East Fork of the Trinity River. He settled there with his family shortly thereafter.

A little discussion about Land Grants. To populate the vast Republic of Texas and ultimately the new state, the Texas Legislature advertised and sold land grants to organizers who would then attract farmers, ranchers and business people to settle in Texas. Land Grants, in the former Spanish Texas, go all the way back to 1716. The first organized American immigrants came in 1821. A man named Moses Austin was promised a contract to land on the Brazos River in exchange for bringing 300 Catholic families from Louisiana. After his death in June of that year his son, Stephen F. Austin, one of the fathers of Texas Independence, assumed the contract.

When Texas became independent of Mexico and became it's own country, under the Constitution of 1836 all heads of families living in Texas on March 4, 1836, except Africans and Indians (interesting since many of those folks had been here since the end of the ice age), were granted "first class" headrights of one league and one labor (4,605.5 acres), and single men aged seventeen years or older, one-third of a league (1,476.1 acres). These communities were often referred to as "Colonies". By the time Texas became the 28th state in 1845, the government continued land grants well into the late 1800's providing grants to members of the military after the "War of Northern Aggression". Yes, many Texans (i.e. southerners) still refer to the Civil War as such, and immigrant groups from Europe. A land grant was even used to compensate the designers and builders of the State Capitol in Austin referred to on maps as the "Capitol Lands" in what is currently the panhandle.

By the mid-1890s the community of Climax, Texas had two gins, a grain elevator, a school, a church, a hotel, and a general store. A post office was established in 1895. Climax has served as a retail point for area farmers for most of its history. It faced a rapid decline as other towns in the area became more prominent. At it's peak in 1910, it boasted 100 residents. Its population was estimated at forty from 1940 through 2000. It is no longer an established township and has become more of a distant neighborhood of the town of Princeton to the south. However there are still remnants of the town still visible if you want to drive around.

The most prominent is the former general store which is situated on the west curb line of FM (Farm-to-Market Road) 1377. Luckily the current owners of the property have saved it from decay by restoring the structure and the facade. You can still make out the word "Climax" on the storefront. We were a little disappointed (especially the wife as it was 103 degrees in the shade that day) in that there was no true "Ghost Town" to speak of but we did get a grand drive in the country. 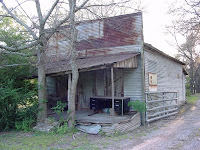 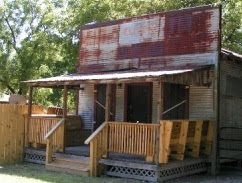 Store in 2004 (Credit Erik Whetstone)  and the Store in 2010
This part of Texas is sometimes referred to as the Prairies and Lakes region of Texas. There are lots of lakes and the availability of water for the most part makes the area lush and green. You can often drive for miles and never encounter another car or truck. There are many opportunities to see old barns and outbuildings as well as lots of wildlife like cattle, horses, cows, deer, possums, and squirrels. Driving through the less populated areas is very relaxing and takes you back to a different time when things were a little slower. Having come from a more urban background, it's easy to see why people move to and work in places like this.


A significant part of Climax still in use today is the original cemetery established when  the town was created around 1850. It's named after the surveyor who laid out the original lines of the town, David Van Winkle. For his work, Van Winkle was also given some land as compensation for his work. He then donated some of that land to the town for their cemetery. Many of the monuments showed birth dates several years before the Texas Revolution.

We were somewhat surprised to see many of the older plots all the way back to the early 1900's were still being tended to and some had flowers on them. As we drove through the area, many family names on some of the ranches matched those on many of the markers we saw. Obviously family members of the original settlers were still living in the community around the cemetery. One thing you observe while traveling through Texas is that the towns you pass through often have stately old cemeteries which reach back to the early settlers of the area sometimes all the way back to the original Spanish or French land grants.

Texas is truly the land of Historical Markers and it seems you only need to turn a corner or pass by a building and you will be confronted by a marker divulging some significant event or architectural point of interest. I will try to make a point of showing some of the more interesting and not so interesting markers as we travel the highways and byways of this land known as Texas.
Posted by Nick Saraceni at 12:36 PM